They float upon the gentle swells
with chins tucked in politely.
Of all the birds, most dignified,
their movements never sprightly.

They look like grumpy butlers
named Oliver or Jeeves
in morning coats of softest brown*
with wings tucked in their sleeves.

They may be only scouting
the source of their next meal,
for now they take off to the air
with energy and zeal.

Soon they’re diving down again,
straight like an arrow shot
into the water’s surface
to see what can be caught.

Bobbing once again,
they lift their bills and then let slide
all that’s in their pouches
to another place inside.

I wonder if the fishes flop
all the long way down,
and this is why the pelicans
then fold their wings and frown?

This wonderful poem was written by fellow blogger Judy of  Lifelessons @ https://judydykstrabrown.com who has many equally brilliant pieces of poetry on her blog. I am pleased she gave kind permission to reproduce it here as i felt it was very apt for such a regal looking bird.

*Judy, being located on the North American continent, is more familiar with Brown Pelicans which are a little smaller than the Australian Pelican, one of the largest birds that can fly.

This Australian Pelican definitely stands out in a crowd as he is quite noticeably bigger than any other birds in the vicinity. He really does not belong where i found him – at all. (A small park reserve in the very middle of a large city suburb).
He did however, appear to be quite at home waddling on the banks and then sliding gracefully into the water where he sailed along in the sun on the rippling water like some giant ocean liner. 😉

When a pelican looks down his beak at you you KNOW you’ve been put in your place… just don’t even try any funny stuff with him…. or else! 🙂 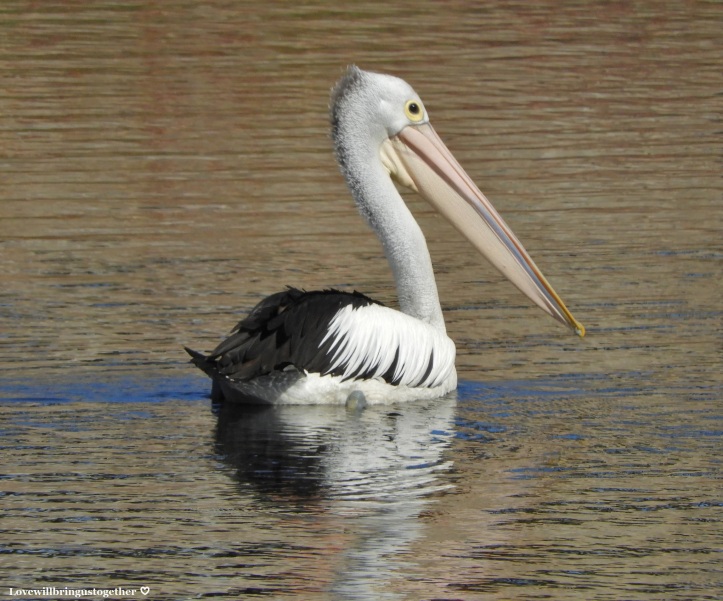 That is a seriously big beak! If you expand the photo you can see just how ‘spikey’ the feathers on the back of his neck are, unusual considering how finely dressed he is everywhere else?

Another shot of ‘William’, or ‘Bill’ the spoonbill, as i call him. I wonder how they came up with that name??? 🙂 His body feathers seem to have the consistency of freshly laid powder snow on rounded hilltops.

I love the reflections of the green reeds on the water behind Bill. 🙂