I Give You The Moon And The Stars…

It was a Full Moon on Tuesday (here) – yet another ‘Super Moon’ it seems?

Untouched photo – apart from reducing the size of the original image by 40% to better fit a full screen. The crater Tycho is the bright ‘spider-like’ crater top of centre while 2 other ‘spider craters’, Copernicus and Keplar, can be seen in the darker mare or ‘sea’.

While i was ‘shooting the Moon’ i decided to try capturing another Star Trail image after the success of my last attempt. 🙂 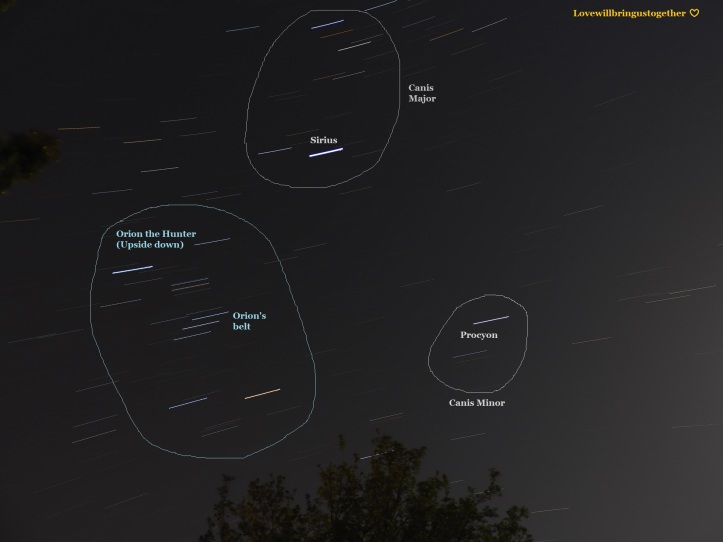 This was the first set of 30 images as combined into a single image (see below) showing an upside-down Orion with the two hunting dogs at this side, Canis Major and Canis Minor – the greater and lesser dogs. When you expand the image it is easy to see the different colours of the stars. They range from bright blue-white, through green, to orangey-red! The blotchy dark shadow bottom centre is my neighbour’s tree. The centre of the image is due North and at an angle from the horizon of roughly 70 degrees. I’m located at latitude 31 degrees South.

While i was reviewing the images i noticed something ‘interesting’!

A little ‘background’ first: My Nikon makes star trail images by taking a normal exposure of the sky and then taking another one 30 seconds later (after the stars have altered their position slightly due to Earth’s rotation on it’s axis) and combines the images. It does this for 29 more times and then ‘saves’ that image as a single image. It will continue doing this until you end the program but each time adding the new image to the old image, compounding them so that the star trails become longer and longer as the program runs.

I let it run for around 1 1/2 hours when the full Moon started to intrude on the frame of the much less bright star mapping. 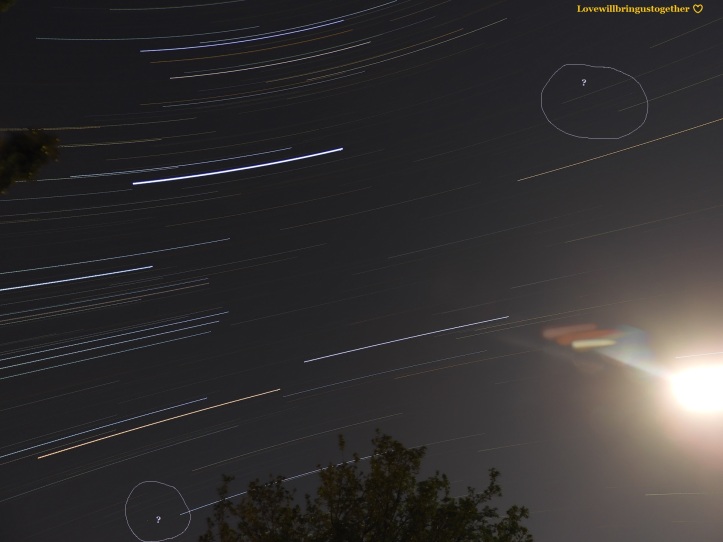 But back to the interesting bit…

There are two areas I have circled and marked ‘?’ which show a bright object similar in brightness to the average star but with only a single point – no trail! Meaning it was only in view at that location for less than 30 seconds. Moreover i have checked all 5 images stored and the lower one appeared first in the second stored image meaning it was more than 15 minutes after i began the star trail. the upper one appeared only on the 3rd image, meaning it was at that point some 30 mins or more after i began filming. Since neither has left another image after the initial one they must have moved out of shot within 30 seconds!

So what’s as bright as a star but moves much, much faster across the night sky?

(Enhanced image giving greater brightness). Top object, centre of screen just below top star trail.  The brighter blue ‘blip’ on the star trail below the object is also curious? The trail begins quite dimly and slowly seems to get brighter as it moves to the West (left) but about 3 minutes after the image begins and just for a single frame the star becomes 3-4 times as bright then resumes it’s original brightness?

A bonus point to all those who noticed (most obvious in the middle photo of the 5) that, unlike most star trail shots, where all the stars rotate around a common point (generally the North Celestial Pole close to the star Polaris) making symmetrical rounded arcs, the stars are making arcs that curve in both directions in the same photo meaning that they are rotating around 2 distinct and separate points (N and S Celestial poles!) Orion’s belt is located approximately on the Celestial Equator and so seem to make strait trails. The stars above are closer to the South Pole and curve ‘up’ while the stars below are further North and curve ‘down’.