I had 2 very special guests visit my garden over the weekend – a pair of beautiful white Western Corellas! The seemed very attracted to my Bookleaf Dwarf Conifer that i posted about recently and spent the best part of an hour decimating the seed pod display.

For a month or more now i had seen (well, heard more often than seen – they announce their arrival and departure with loud raucous squawks!) small groups of Corellas flying overhead between their feeding and nesting grounds, but they never dropped in – until now.

I find them quite beautiful in their pure white feathered finery and they behaved themselves with decorum whilst feeding, (apart from having the appetite of a horse – they never stopped eating the whole time!) never making a single sound and being perfectly happy to continue their meal even while i walked past them to fill the birdbath in case they felt like a drink to wash it all down (they didn’t). However their close relatives in the East of the country have been known to make quite a nuisance of themselves by gathering in country towns in their thousands and creating one almighty din with their constant squawking calls to each other, eating all the food they can find, picking apart things with their strong beaks (like the seals around car windscreens and clothes off washing lines!) and leaving tonnes of poo behind. 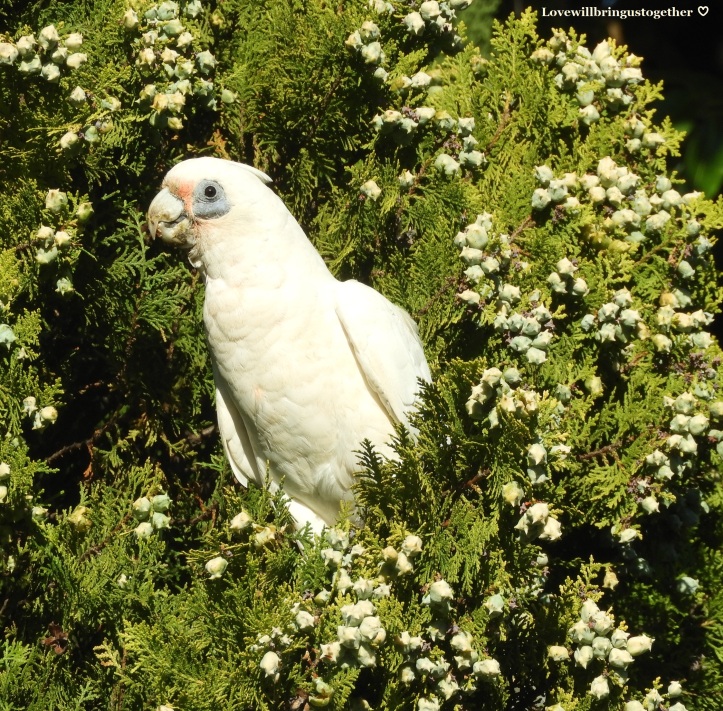 A smaller relative of the Cockatoo the Western Corella is endemic to the South West of my state. It’s feathers are normally snow white with a little red tinge around the beak and blue grey skin around the eyes.

The corellas also have a crest they can raise when alarmed or when attracting a mate.