Why it can be not what you eat but what you think that determines how well your diet works.

The following is an excerpt from an interview with Dean Burnett, Doctor of Neuroscience at Cardiff University in the UK. The full interview text can be found here: The Idiot Brain – it’s worth the read. 🙂

Informed by the latest neuroscientific research, his book takes us on a tour of the brain, pointing out all its fascinating foibles and imperfections.

Dean Burnett: Well, I think the obvious example would be in terms of diet and eating, that’s one sort of thing that people can really relate to, because everyone at some point wonders about diet or their health and their eating habits. When you think about it logically, food is obviously essential, it is something we need, it’s something we require to just survive on a day-to-day basis, and we have a very sophisticated digestive system to regulate our food intake. We have a very complex nervous system in the stomach, so much so it’s actually referred to as a second brain sometimes, the enteric nervous system. And we have a suite of hormones and feedback cycles and mechanisms so that the digestive system can recognise how much food we eat, how much we need, what sort of intake we’ve got and then feed back into control of raising or lowering our appetite and things like that. So it’s a wholly dedicated and evolved system to monitor our food intake.

But as soon as the brain gets involved the higher functions there messes everything up because it can override the stomach’s regulation system. And the example I always go down is that if you’ve had a massive meal and you are sat there groaning from how full you feel right now, then the waiter comes along with a desert menu and you say: “Oh yes, I’ll have a desert as well !” That shouldn’t make any sense. You are literally full but the brain decides, oh, that’s something nice, I’ll have that, and then shuts down all the signals that the digestive system is sending saying: “No more, please, no more! We can’t handle this”. The brain says shut up and deal with it because this is coming in!

And also things like our memories have a really weird affect on eating and diet because it turns out a lot of research shows us how our recall can have more influence on the amount of food we eat than does the food , like my personal favourite study from the University of Bristol, was that they studied people’s eating habits with certain amounts of soup. Some people had a big bowl of soup, some people had a small bowl, and they asked them how soon they got hungry afterwards. And as you’d expect, people who had a small bowl were hungry sooner than those who had a big bowl. But due to some ingenious setup involving pipes and pumps and soup vats, some people actually had their bowl refilled as they were eating it and some had it drained while they were eating it. So some who thought they had a big bowl actually had a small bowl quantity and vice versa. But it doesn’t matter how much they ate, it’s what they thought they ate and that is what influenced the appetite. And that’s why if you don’t remember eating something you end up being hungry a lot sooner!. So eating food while distracted and talking to someone, you might not remember eating it and you will be hungry a lot sooner than if you just focus your mind on what you are eating at the time. That’s a weird way in which the brain interferes with and overrules the digestive system in ways that aren’t necessarily helpful. Because physically we have eaten the food, it’s all in there, it’s the brain that has decided, no, no, what happened is wrong, I want more now. And that’s how diets can be so tricky and so hard to regulate and keep going. 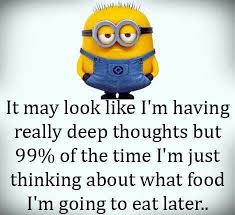 So now you know! What you think you eat can be as important, if not more so in some cases, than what you actually eat!

Thinking you are eating lettuce and an apple while shovelling large portions of fried fatty foods, followed by a gallon of ice-cream down your gullet is unlikely to fool anyone, however.

But try it if you like – and send me the results. 😉