… Up in our state’s North-west they have had over 300 millimetres (that’s about a foot or more) rainfall in some locations since Saturday. To put that in a little more perspective that is over a third of the rainfall down here in Perth for the entire of 2008 – and 2008 was a ‘good’ year for rain for us as our climate slowly dries. 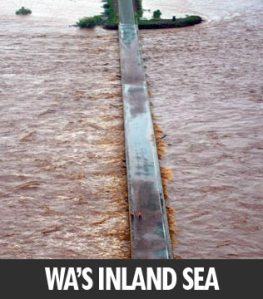 Given the size of the catchment areas for the rivers up North this has resulted in many normaly ‘dry’ rivers breaking their banks and flooding wide areas of land.

One particular river level peaked at 19 metres (over 60 feet) this week when it is at times all but empty of water.

The ‘madness’?? The flooding has washed out a major drinking water pipeline to Karratha and residents are being told they have to cut down on their water use to conserve supplies!

Footnote: The town of Bellingen (NSW, East Coast of Aus) received 2/3rds of their entire annual rainfall in 12 hours this week!!